Showing posts from April, 2012
Show all

Shake down cruz in Boston Harbor...

Going sailing soon in Boston Harbor after she is put back together. Hopefully steaming images live. http://bit.ly/JhPmKH

Working on Vanish on Union Wharf when this friend swam by. What type of jellyfish? @neaq #ocean #fish #jellyfish

@PumaOceanRacing I have some wasabi. Boots are packed. I'll be right there. See you in Miami. #volvooceanrace

Twitter Tips or people in the Marine / Sailing biz...

April 20, 2012
TWITTER TIPS for people in the marine/sailing biz because your Tweets are making me crazy.... Twitter Tip #1: Don't send a 100 Tweets all at once when you get out of bed. Automatically time your posts with a program like Hoot Suite. Spread them out an hour apart. Twitter Tip #2: Don't just send links in your Tweets. Put some kind of short description. Twitter Tip #3: If you are going to post videos or images...make sure they look good and they don't bring down your brand. Be very careful if you are corporation doing posts from your phone. Twitter Tip #4: Watch how the pros handle their social media. Follow a pro like @sophluther at @VolvoOceanRace to see how it's done right.
Post a Comment
Read more

Put a new slide show and a few new images on my website today.

No wonder why FB bought Instagram for a billion. Only 25% of my FB photos posts of the Jackson Cup made it to my wall @instagram #instagram 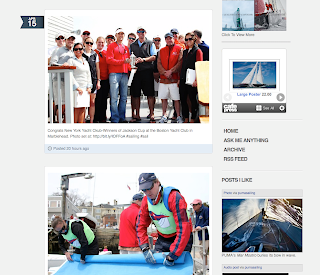 Flag on the play and she looks excited about it. Jackson Cup at the Boston Yacht Club. http://bit.ly/IOFFoA #sailing #sail

What sucks about today? I'd rather be sailing. What a day! Jackson Cup at the Boston Yacht Club. http://bit.ly/IOFFoA #sailing

Laying down on the job. Jackson Cup at the Boston Yacht Club. http://bit.ly/IOFFoA #sailing

Rough Life: Sun and Jackson Cup action on the porch at the BYC.http://bit.ly/IOFFoA #sailing

Wind has picked up a bit. Photo set of Jackson Cup in Marblehead: http://bit.ly/IOFFoA #sailing #sail

Guess where my perch is? Live upload from 2012 Jackson Cup at Boston Yacht. Photo set http://bit.ly/IOFFoA

Not much breeze but lots of rays. Live upload from 2012 Jackson Cup at Boston Yacht. Photo set at http://bit.ly/IOFFoA

WANTED: Chessy contest suggestions so I can give away some my sailing journals.

WANTED: Chessy contest suggestions so I can give away some my sailing journals. I have some extra iPhone covers too. http://bit.ly/Ii2aOJ
2 comments
Read more

I "think" I finally cleaned up my act on Twitter and I'm not being such a twit.

I "think" I finally cleaned up my act on Twitter and I'm not being such a twit. I found the silly apps that were doing multiple posts and turned them off. So feel free to follow me again or turn me back on. http://www.twitter.com/leightonoc I will be Twitting photos live from the Jackson Cup this weekend. If you think I'm being annoying...shout out to me and tell me I'm being annoying.
Post a Comment
Read more

This weekend I'll be covering the Jackson Cup in Marblehead. The Boston Yacht Club will play host to ten racing teams for their 13th annual Jackson Cup. Clubs included New York Yacht Club, Noroton Yacht Club (Darien, CT), Royal Thames Yach t Club (London, UK), Seawanhaka Corinthian Yacht Club (Long Island, NY), St. Francis Yacht Club (San Francisco, CA), Southern Yacht Club (New Orleans, LA) and Marblehead's own Boston, Eastern and Corinthian Yacht Clubs. Each club will have three teams and will race for two rounds of round robins for two days followed by a medal round on Sunday. I raced for the St.Francis Yacht Club and had a blast. This is one of the three videos I produced last year of the event. Here is a link to more videos from 2011: http://www.youtube.com/playlist?list=PLFB83848B9719575E&feature=plcp I hope to be able to use some new geeky technology to upload photos live to my website while covering the covering the regatta. (Sorry about all
Post a Comment
Read more

Does it bite in Naples?

What's this in Kyle Langford's hand at 1:52 of this America's Cup video from Naples? Does it bite? http://youtu.be/axDDV1ncvxQ
Post a Comment
Read more 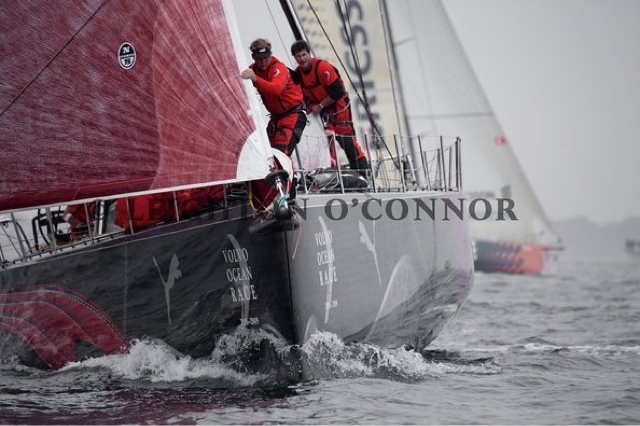 Happy Easter! Get it? Few last runs for the end of the season @skiwildcat . Not too bad and snowing'

Images of 2012 International Rolex Regatta finally keyworded with boat names. Not my favorite thing to do. http://ow.ly/a4A32

Who would rather be sailing today? And where?